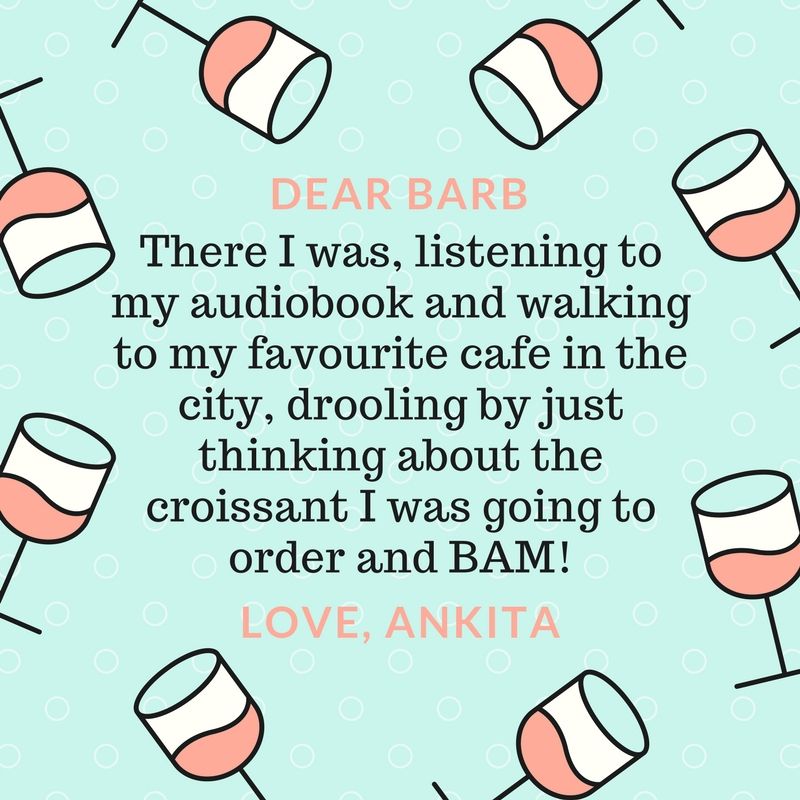 This morning when you called me to say that someone somewhere messed up something and now, you leave for Sweden on Friday instead of Thursday, I felt very relieved for your sake. Otherwise, it would have been ✌️ much for you, what with the interview we have scheduled for tomorrow evening. I think that after each interview we do, we both need to give ourselves some time to switch off and relax (or as in my case, go off the grid) for a few hours. Because so far, only Shane has been witness to the hours of prep work that goes on behind the scenes. Anyway, I'm glad you get an extra day to unwind before you board that flight to kick some table-tennis ass and make grown men and women cry.

But the reason I brought up our conversation from earlier this morning is because of that part where I tried to convince you (albeit ineffectively) that I am a lot calmer these days. That I don't flip out and lose my shit anymore every time I'm faced with the task of talking to a stranger. In fact, yesterday, I believe I did a splendid job of approaching and being friendly with Tia during the interview. For the first time since we started doing interviews, I volunteered to be the first one to call a guest despite how uncomfortable it makes me feel to not have you around as a buffer in these situations. But I was okay this time and was feeling proud of myself until...

...I started walking to a cafe this morning. I was happy, Barb. Happy and calm. There I was, listening to my audiobook and walking to my favourite cafe in the city, drooling by just thinking about the croissant I was going to order and BAM! My audiobook stops playing and my phone starts ringing. For a minute there, I got annoyed at my mum for calling again even after I told her I was going out. And then I remembered that I had neither wi-fi nor mobile data while walking to the cafe. Which meant that this was an actual call to my phone and you know how I don't like talking to people on the phone (or under any circumstances for that matter) unless I already have them scheduled on my calendar?

To make matters worse, this was a call from a private number. A PRIVATE NUMBER!

What is wrong with people, Barb? Why would people call other people? And that too, from private numbers? Isn't this the age for socially awkward individuals like me to thrive? The age when people send text messages and emails to communicate and ask for permission via text before calling? Hell, I text you first and ask if you're free before calling you! Even my mother does that to me sometimes. And if all else fails, there's caller-id on our phones to let us know who's calling.

Then why would someone call me from a private number without prior notice?

Anyway, I'm sure you already know what happened next. I stood fixed on my spot and stared at my screen, patiently waiting for the caller to give up so that my audiobook would automatically resume playing from where I'd left off before I was so rudely interrupted. If I ever receive a call from a private number while you're around, you're going to have to pick up and tell the caller that they're a douche, okay? Also, you should know that if at any point, you're held hostage and you have only one chance to call someone, never call me from an unknown number. I won't pick up and you will die.

But all's well now because I'm typing this away from a bright and sunny spot in my cafe, sipping on our favourite Curiosity Cola. Remember the dark rum and curiosity cola cocktail I made for you when you came over? We have to do that again. YUM YUM YUM! RUM YUM YUM!

Also, if your mom is reading this, then hi aunty Meenal has never touched an alcoholic beverage in her LIFE. She just bakes healthy brownies and goes swimming early in the morning, only to FREAK OUT thinking there are sharks in the water #truestory